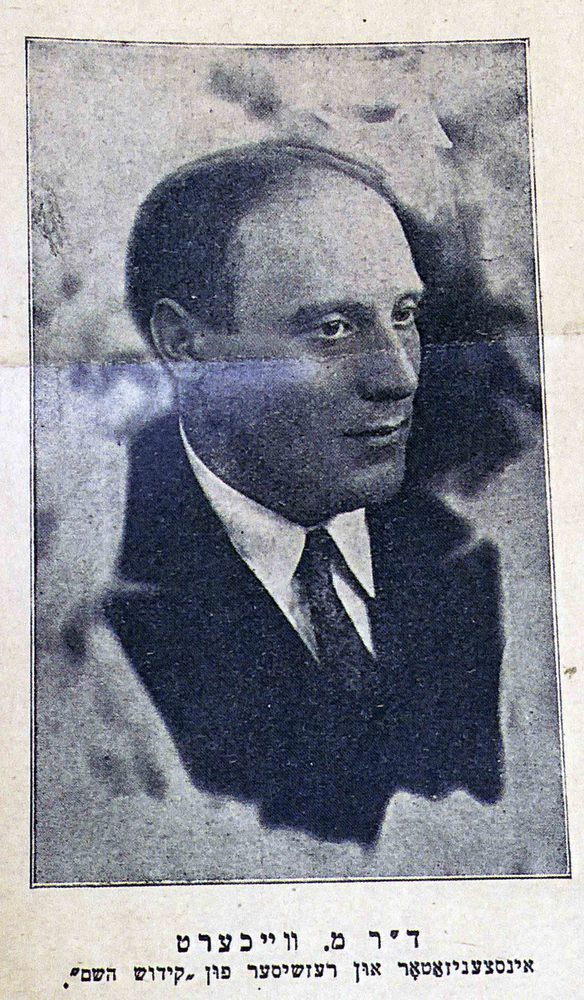 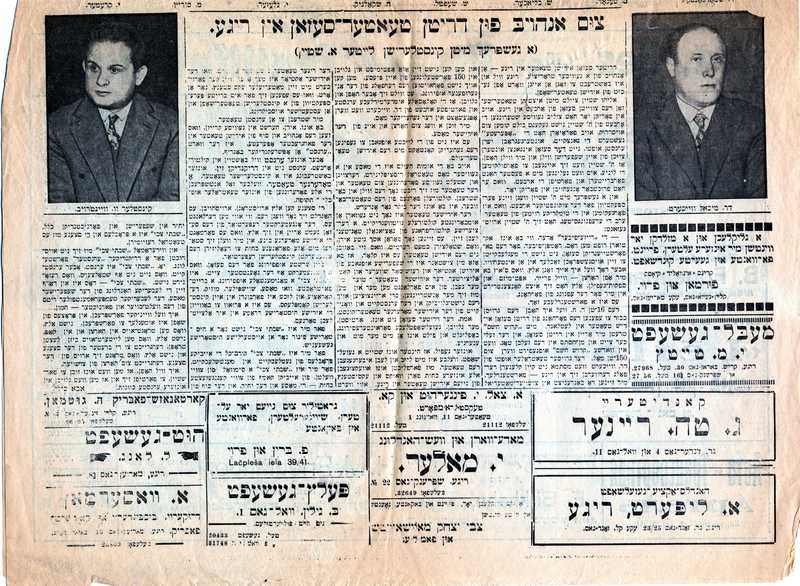 Michał Weichert (Mikhl Vaykhert, pictured in the above article on the right) was a theater director, historian, critic, and communal activist. Born in Podhajce in eastern Galicia and raised in Stanisławów, Weichert received his education at heder and in Polish schools. He attended law and humanities programs at universities in Lwów, Vienna (receiving his J.D. in 1916), and Berlin; in the latter city, he studied avant-garde theater with the preeminent German director Max Reinhardt.

In 1918, Weichert settled in Warsaw. Weichert directed plays for leading Yiddish dramatic companies, including the Vilner Trupe. Among his productions were his own dramatization of Sholem Asch’s  Sanctification of the Name, 1928 (Kiddush ha-Shem), Shylock (Shaylok, 1929), Arn Zeitlin’s contemporary historical drama City of Jews (Yidn-shtot, 1929), and Moyshe Lifshits’s comedy A Tale of Hershele Ostropolyer (A mayse mit Hershele Ostropolyer, 1930). Focusing on Jewish themes, Weichert’s productions were staged in an epic style that used lighting, music, and stage design to create a coherent theatrical vision. Frequent collaborators were the composer Henekh Kon (1890-1972) and the visionary stage designer Władisław Weintraub (1891-1942) (pictured left).

In the 1920s, Weichert organizeda theater technium in Warsaw. The graduates, idealistic youth committed to political activism and experimental art, became the core of Yung-teater (Young Theater), which Weichert directed from 1932 to 1939. Yung-teater dramatized favorite themes of the international Left, including the trial of Sacco and Vanzetti and the Scottsboro trial. Weichert also produced plays based on Yiddish literary works that were acclaimed in the Yiddish and Polish press for their energy and innovation. Often staged in tight spaces, the productions featured sequences of rapidly changing scenes, briefly illuminated, sometimes simultaneously, and staged on every side of the audience. Through these techniques, the audience was to be provoked to abandon neutrality and act on the plays’ lessons. The company came under continuous government pressure to alter its activist repertoire; in 1937, it was forced to move to Vilna and change its name to Nay-teater (New Theater), under which it performed until 1939.

In an interview published in the newspaper , Weichert commented thus on his acting studio:

In 1929, I renewed the activity of my drama school that had existed from 1922-24, a school that had instructed a gallery of distinguished actors. Thew new studio took on as its task not only prepare actors for Yiddish theater but also a specific Yiddish artistic approach . I assembled thirty young people, mostly working-class. For a three-year period with fanatical devotion, we studied diverse theatrical studies.