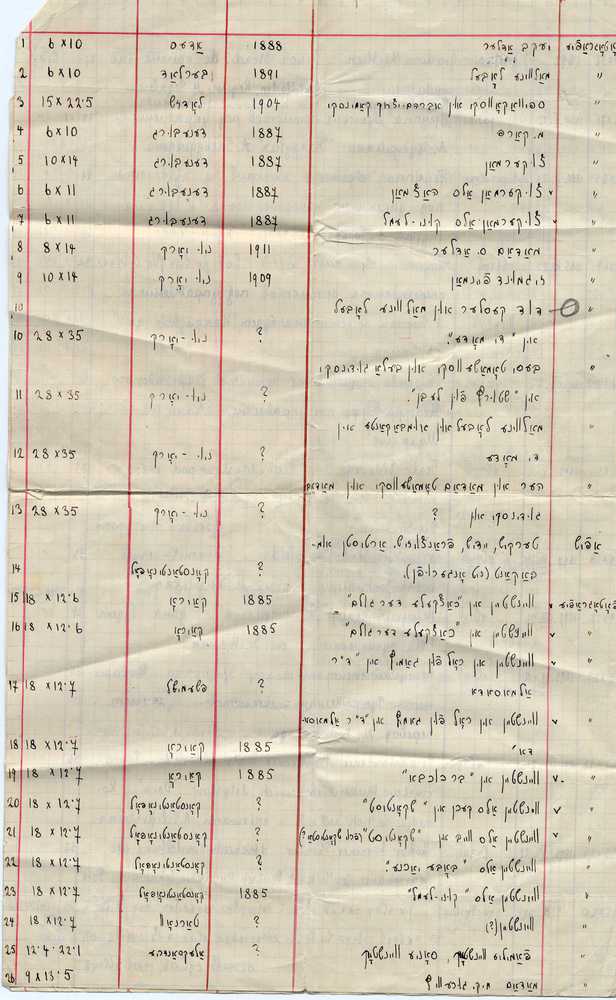 The collections of the Esther-Rachel Kaminska Theater Museum grew considerably in a very short time. In 1927, Ida and Zygmunt donated the museum to YIVO (then known as the Yiddish Scientific Institute and located in Vilna). This led to Yiddish theater becoming one of the institute's important  priorities.

Max Weinreich (1894-1969), one of YIVO's founders, sought to expand the Esther-Rachel Kaminska Theater Museum Collection by soliciting donations of materials from associates around the world, as well as from the general public. In particular, Weinreich sought out ephemera collected by Jacob Shatzky (1893-1956) to the Yiddish Theatrical Museum that he had established a year earlier in New York. Among the items he sent was the letter Shatzky wrote to potential contributors to his soon-defunct museum on "Yiddish Theatrical Museum" letterhead.  Weinreich actively cultivated the growth of the museum until the outbreak of World War II.


This is an undated part of an inventory of the items in the museum. In a 1929 article she published in YIVO's inhouse newspaper Yedies, the theater museum's archivist, Fanny Epstein, boasted an inventory of 1,200 items, of which 400 had been placed on exhibit. The museum would continue expanding over the course of the following ten years, until the outbreak of the war.

“Ida and Zygmunt Donate the Theater Museum to YIVO in Vilna (1927),” YIVO Online Exhibitions, accessed January 29, 2023, https://strashunlibrary.yivo.org/items/show/2336.
Submit a transcription, translation or additional information on the song or the performer