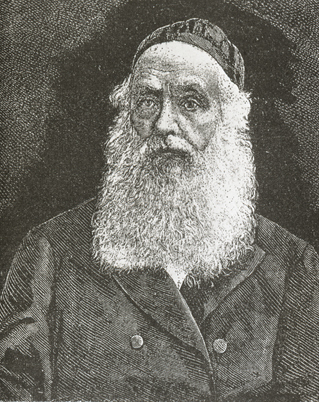 What Was the Strashun Library?

The Strashun Library in Vilna was founded in the 19th century as the library of a private collector and grew to become one of the most important public Jewish libraries in Europe.

Its founder, Matityahu (Matisyahu) Strashun was a highly regarded Jewish intellectual. He was a maskil, an adherent of the Haskalah (often referred to as the Jewish Enlightenment). Strashun was not only a scholar of traditional Jewish literature, but also knew Greek, Latin, Hebrew, German, Russian, Polish, and Yiddish. He was a fanatical bibliophile, and collected rare books and manuscripts, amassing nearly 7,000 volumes during his lifetime. Childless at his death in 1885, he willed his collection to the Vilna Jewish community on the condition that they would create a Jewish public library. His wish was fulfilled and the Strashun Library was opened to scholars in 1892 and then to the public in 1902. 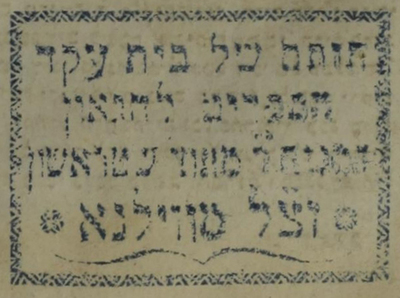 Stamp of the private library of Matityahu Strashun

Inspired by Strashun’s generosity, a number of other Vilna intellectuals, among them Shemu'el Yosef Fuenn, Judah Behak, and Hayim Leib Markon, donated their collections to the library, helping to build the library into an incomparable public resource. It had 19,000 books by World War I. 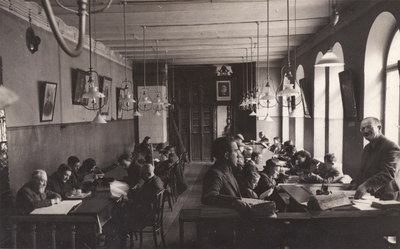 The Reading Room of the Strashun Library

The Strashun Library was open from 10:00am to 2:00pm and 5:00 to 8:00pm every day including Saturday (although writing was absolutely forbidden that day of the week in honor of Shabbat). It was, however, closed on major Jewish holidays. Books were not allowed to be taken out, although board-approved researchers were entitled to take materials home. The reading room only had 100 seats and frequently readers would have to sit two to a chair. There was often a line to get in, and, on occasion, the library would have to shut its doors because of fear of dangerous overcrowding.

Throughout periods of war, occupation, and other privations, the Strashun Library remained open to all. Throughout its existence, it functioned as the gathering place for the most important intellectuals, journalists, political activists, and writers of the day. Many of the visitors inscribed their impressions in the library's so-called "Golden Book." At one table you could find socialist ideologues; at another, rabbis and religious scholars. All were welcome and all partook of the intellectual zeitgeist of Jewish Vilna.